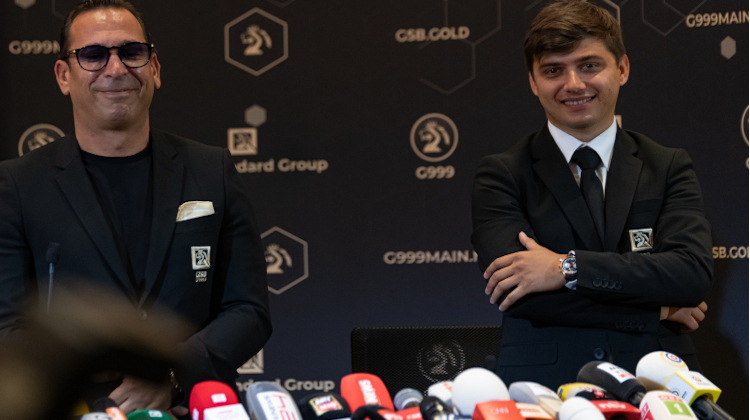 GSB Gold Standard Banking Corporation AG (GSB), one of Germany’s leading software, IT and block chain groups, has launched an unprecedented technology that makes transactions of crypto currencies much easier and above all much faster. Crypto currency, also called crypto money, is a digital means of payment based on cryptographic tools such as block chains and digital signatures. As a payment system they are independent, distributed and secure. GSB is one of the world market leaders in this field for highly developed software trading modules, platforms and signal/data streaming for the financial industry.

Only recently, Josip Heit, Chairman of the GSB Board of Directors, together with his team of international software and hardware developers, presented „G999“, a unique electronic money system, at a glamorous opening ceremony in Monte-Carlo, in the presence of a large contingent of international press, Card device and apps for telecommunications and messengers in one, inspired by the deflationary token economic model, which allows fast payments, micro-charges and a variety of other options, including a communications network that guarantees customers absolute privacy, which will be impossible to decipher with today’s technology.

Enjoy the great future of the digital age,“ announced GSB’s CEO, introducing Alexandru Cocindau, Chief Technical Officer (CTO, Technical Director) of the GSB Group, who chairs the internal Group Development Group. G999 is based on the idea that block chain technology must ensure compliance with environmental regulations, in particular the promotion of energy saving. At the same time, it meets the current need to manage personal data in a completely secure and risk-free space, away from the mainstream web network through a decentralised data centre.

G999 enables tokens (Tokens are basic building blocks for operations with cryptographic values: Only those who have a valid token are allowed to execute a transaction on the associated block chain) to store, trade and use tokens almost simultaneously in a wide ecosystem without being dependent on intermediaries such as banks or payment processors. In addition, for the first time it offers wallet communication, a spam hacker-free e-mail service and a voice & chat system that is fully integrated into the platform. The way this system works is likely to make it impossible for decades to eavesdrop on or intercept, among other communication channels, making this system more than just system relevant.

Our block chain ecosystem is open-source and based on computer technology, which allows anyone to develop their new or established business according to a proof of stack model (Proof of Stake is a process by which a block chain network reaches a consensus on which participant may generate the next block),“ emphasised the CEO of the Hamburg-based GSB Group. A targeted academy has also been created, which regularly supports each user in all steps with texts and technical videos to facilitate the use of this new tool in a simple and secure way.

„We really believe that only a well-informed community is able to benefit from the whole ecosystem“, underlined Alexandru Cocindau. Thus, G999 has a multitasking character and allows information tokens and additional spy-proof services without the risk of external manipulation.

Blockchain is not just a bit coin, it is something great that can be used for different purposes in almost all industries,“ Josip Heit emphasised during the international press conference. „In my opinion, it is one of the best technical creations of modern times,“ he added. „As far as the cost of the Blockchain platform is concerned, it is dynamically calculated according to the amount of information you send through the platform; our goal is to make this technology fully accessible to everyone worldwide,“ emphasised CTO Cocindau. G999 will indeed interact continuously with users and inform them of the actual balance according to its use in transparency. „To prevent spamming, we have introduced a charging system that makes any malicious message so expensive that it hinders its dissemination,“ added Cocindau.

Questions during the press conference, such as Do you see the current economic crisis due to the pandemic as an opportunity or as an obstacle to the promotion of G999, answered Josip Heit, CEO of the Group, which has partners in 120 countries around the world, by saying: „I am not giving any financial advice here, but I do have confidence in digitisation and the infrastructure that comes with it. In this respect, there are many improvements that we can make to speed up the processes in the global economy and make them more user-friendly“.

The youngest member of the group of companies, GSB Gold Standard Bank Limited, with an A-Bank licence, banking licence number: B2020020, IBC Register: HY0050034, Mohéli, (in banking terms, a banking licence is the official licence to operate a credit institution), will be responsible from 15 October 2020 for consulting, support (assistance) and listing of the various exchange platforms for G999 blockchain, and this also simultaneously for the all-round topic of G999 blockchain, staking and telecommunications.

GSB Gold Standard Bank Limited is independently focused on trading independently of fiat currencies and is one of the few banks not to accept fiat currencies such as (Euro, Dollar, Yen, Ruble, Pound Sterling, Swiss Franc and all others, the opposite of fiat money is commodity money, such as gold) or cryptocurrency: Bitcoin and Ethereum and Altcoins, which GSB Bank is proud to be one of the first offshore banks to be independent of Fiat currencies and to be the first GSB Blockchain Bank, AML (Anti-Money Laundering Act) and KYC („Know Your Customer“ process, also known as KYC, is in simple terms the principle of verifying the identity of your customers) are conducted in accordance with regulation!

It is worth mentioning that the G999 will start trading on various exchange platforms from 15 December 2020, ready to start. Further information about G999 can be found here: https://G999main.net