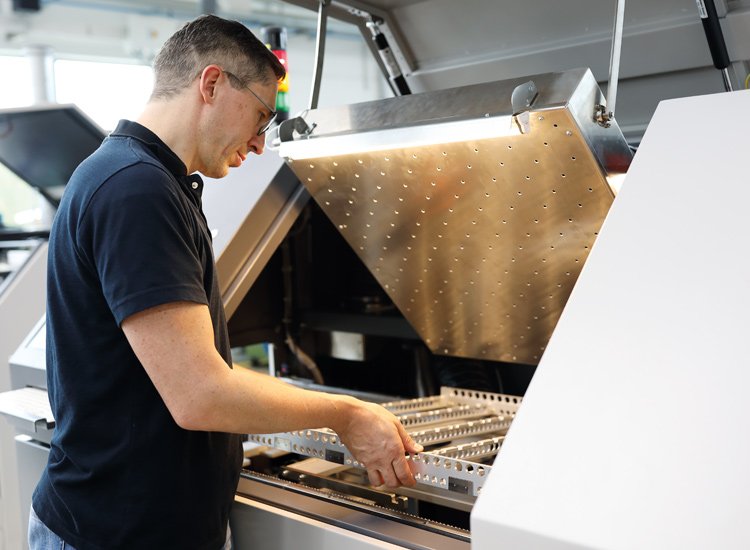 With the CondensoXM smart, Rehm Thermal Systems has designed an all-rounder for electronics production

Whether for aerospace engineering, medicine, the e-mobility and automotive sectors, power electronics or LED manufacture – the application areas of reflow soldering are many and varied. High-quality soldering of electronic contacts ensures optimum functionality of the electronic components. But what happens when components on the circuit board are very large or high-mass? Or if vacuum soldering processes need to be implemented inline? Rehm Thermal Systems designed the CondensoXM smart vapor phase soldering system for precisely these requirements – making it an all-rounder for electronic production. This inline system is particularly suitable for medium throughput and medium-sized series. Other highlights include the loading method and an additional optional vacuum pump.

In vapor-phase soldering (condensation soldering), soldering is accomplished using a hot vapor. In this case, the heat transfer in condensation soldering is up to ten times higher than with convection soldering. This means that with the Condenso series from Rehm even large, high-mass boards can be reliably processed in a stable atmosphere and with innovative vacuum technology. The CondensoXM smart vapor-phase soldering system can be integrated into any production environment – incorporated as an island solution for several production areas and loaded manually or loaded automatically using upstream handling systems. To ensure this optimum inline capability, the CondensoXM smart is equipped with an outer return transport for the goods carrier. This reduces cycle times and ensures optimum soldering results even with larger volumes. The CondensoXM smart can be opened on the operator“s side to load or remove assemblies, meaning that assemblies can be manually placed on or removed from a goods carrier which is already in the system. The goods carrier remains in the system, which enables ergonomic loading.

The CondensoXM smart can be equipped with an additional vacuum pump. This increases reliability, which is needed in particular for critical assemblies which make increased demands on the vacuum process. Moreover, two vacuum pumps can be used to shorten the cycle time and so increase productivity for vacuum applications under 10 mbar in particular. Virtually void-free soldering results can also be achieved with the vacuum option. After soldering, the assembly is passed on and into the cooling process. At the same time, process gas is extracted and cleaned. A large part of the Galden® can therefore be reused – a solution that is particularly material-friendly and environmentally friendly! A vacuum is created during extraction, which also ensures that soldering material is dried quickly. The extracted Galden® is filtered and cleared of impurities using granules. About 99.9% of the medium can be recovered as a result.

Flexible cooling options inside and outside the process chamber guarantee optimal cooling rates and the correct temperature for downstream production processes, such as x-ray inspection or functional testing.

As a specialist in the field of thermal system solutions for the electronics and photovoltaics industries, Rehm is a technology and innovation leader in the modern and economical production of electronic modules. As a globally operating manufacturer of reflow soldering systems with convection, condensation or vacuum, drying and coating systems, functional test systems, equipment for the metallisation of solar cells as well as numerous customer-specific special systems, we are represented in all relevant growth markets and, as a partner with more than 30 years of industry experience, we implement innovative manufacturing solutions that set standards.