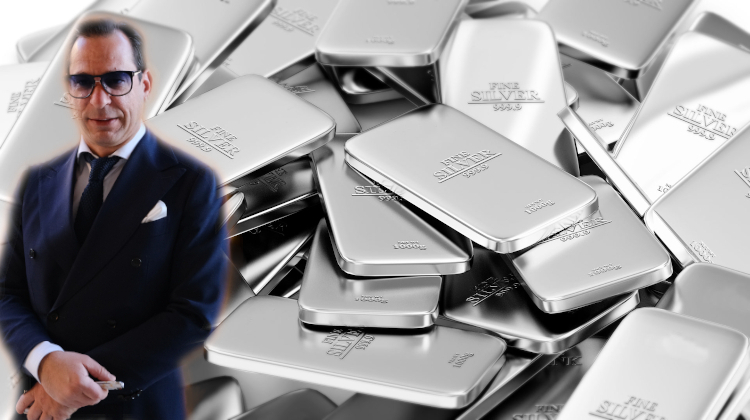 After gold has reached new all-time highs, the white metal silver is now coming into the focus of investors. In view of the general conditions and the historically favourable price ratios, silver holds significant price potential in the opinion of commodity expert Josip Heit.

Mr. Heit, what do you think of silver in times of a currently emerging economic crisis, caused by the coronavirus pandemic?
Josip Heit: “If one looks objectively at the development during the global financial crisis from 2008 onwards, then silver in particular currently appears to have great upside potential. Since the beginning of the 20th century, the average gold-silver price ratio has been 1:47.
Exactly 100 years ago, i.e. in May 1920, an ounce of gold (31.1g) cost only 20 ounces of silver – currently it is over one hundred ounces of silver. This development was similarly significant for the price of silver over the same period: from 87.4 on 20th April, the price ratio rose by a gigantic 44 per cent to an all-time high on 18th March 2020 at 126.4. Currently, silver continues to rise steadily and an end to this rise in value is currently not in sight!” loose monetary policy of the central banks is more topical than ever. After all, anyone who prints paper until the presses glow should at least consider that inflation is not far away, which could cost citizens all their possessions, which is why gold and silver will be the economic hits of the coming years!

Mr. Heit, you are Chairman of the Board of GSB Gold Standard Banking Corporation AG and a commodities expert, do you expect problems of supply and demand for silver?
Josip Heit: “Due to the Covid-19 restrictions for 2020, I expect a slight decline in supply of precious metals. On the other hand, I expect a slightly smaller decline in demand for silver. This overall more favourable mine-output/demand ratio is mainly the result of investment demand, which could rise by a whopping 16 per cent this year. In my opinion, demand for physically covered investment products (ETPs) alone will be much higher than in 2019, which means that the supply deficit is likely to increase further, which could have a further positive effect on the silver price. If we look back to 2019, there was already a supply deficit of 50.4 million ounces of silver than 1,567 tonnes.

Mr. Heit, large companies such as Lufthansa and Hertz Car Rental, to name just two heavyweights in the economic market, have caused major problems due to the corona virus. How do you see the possibilities of gold and silver in relation to precious metals?
Josip Heit: “Since the monetary and fiscal policy measures to cushion the economic consequences of the pandemic are still in full swing, the global debt burden will continue to increase dramatically and massively in 2020. When we soberly consider that by the end of 2020, more than 20 trillion US dollars in bonds and loans will be due worldwide, one gets scared. After all, USD 4.3 trillion are due in emerging markets alone. This means that the emerging markets will have to refinance USD 730 billion of foreign exchange debt by the end of 2020. In the current economic climate, it will be very difficult to cope with a possible recession.

As monetary alternatives to fiat currencies, silver and platinum offer unimaginably significant advantages: The precious metals have an intrinsic value (cannot go bankrupt) and cannot be multiplied at will. Their physical properties also make them indispensable for modern industry. I would like to point out here that the price of silver alone has continued to develop excellently in recent days. The silver mine shares have partly gone through the roof. Especially yesterday, Friday, 22.05. 2020, silver investors were practically only prepared for rising prices”.

Mr. Heit, where do you see silver in the coming years and how do you rate it compared to gold?
Josip Heit: “For a long time, silver was the stepchild of the stock market. While gold made one high after another, silver could not follow the movement. But that is nothing unusual in the history of the precious metals markets. The silver price often lags behind, but then catches up in the course of the movement, mostly at the speed of light, only to virtually explode towards the end. And on a positive note, the long period of time in which silver has had to lag behind the price of gold could indicate a very long high in the precious metals market, especially considering that silver is becoming increasingly important, especially in our digital age. Let us take the production of mobile phones and notebooks as an example. Today, silver can be found in almost every smartphone, which is becoming more and more important, especially with increasing production figures. Since the coronavirus pandemic, the exploitation of silver deposits has been declining, and in mining, too, there are rules of clearance; adherence to these rules affects the production of silver. I personally believe that the current tests currently being conducted with silver in the field of medical products could possibly lead to a sensation of our century.

As far as gold is concerned, it is too clear that gold, as a precious metal, has fascinated people for centuries. Paper money currencies have come and gone. But gold has always secured the prosperity of its owners – and this aspect is more topical than ever in times of a global coronavirus pandemic and an ultra-loose monetary policy of central banks. After all, anyone who prints paper until the presses glow should at least consider that inflation is not far away, which could cost citizens all their possessions, which is why gold and silver will be the economic hits of the coming years!