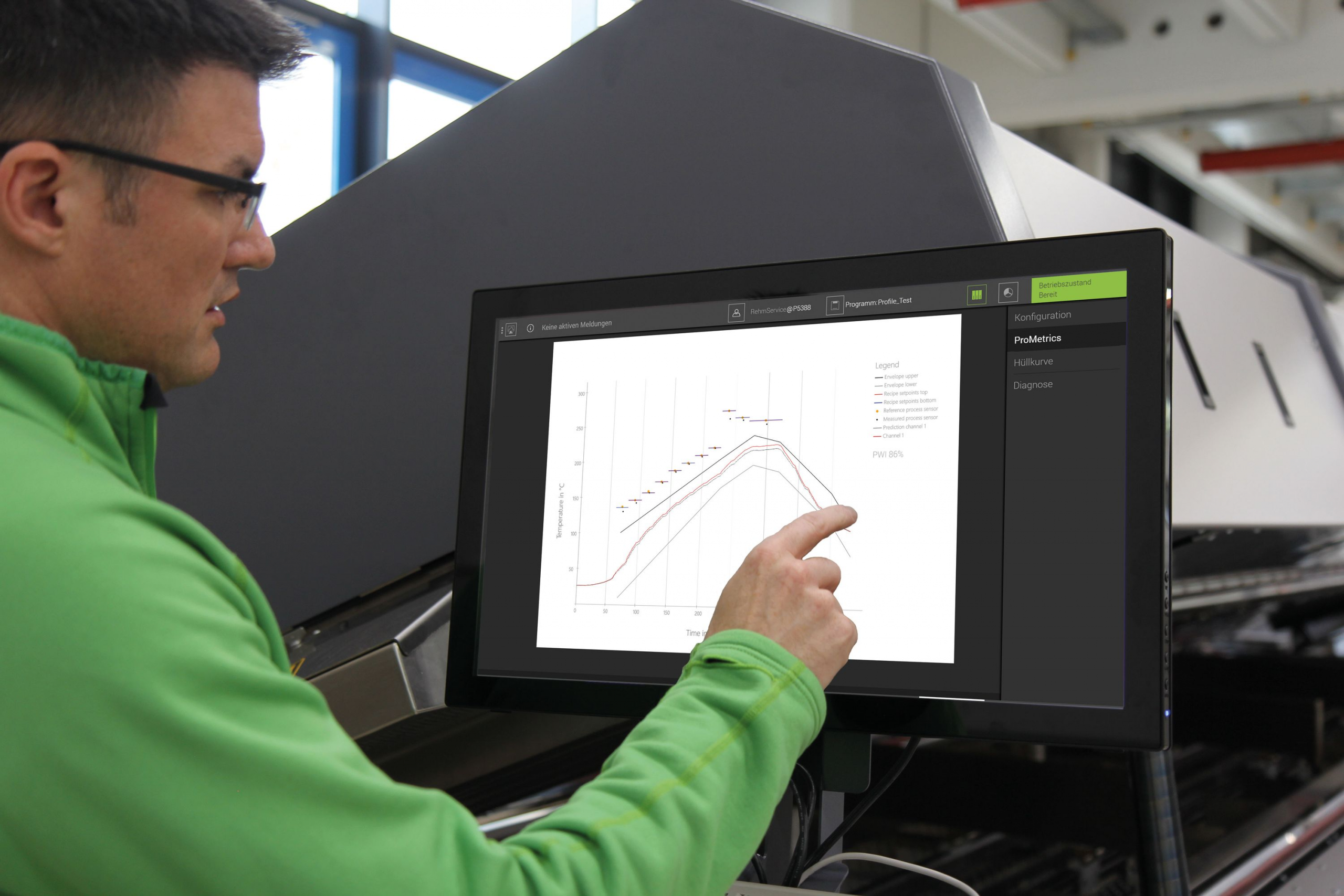 With ProMetrics, Rehm Thermal Systems has developed an instrument for monitoring thermal profiles during soldering. It checks how well the previously created profile corresponds to the required, predefined specifications. The process window index (PWI) ascertained in this way is a statistical measure that quantifies the quality of a thermal process. This is mostly determined by the specification of the solder paste and the most heat-sensitive component. The following applies as a general rule: The lower the PWI, the better the profile and thus the more efficient and stable the process.

The generation of real-time data for each component allows the exact determination of the assembly position and reliably detects any deviations or delays in the soldering system. Process changes can thus be detected immediately. This leads to the greatest possible reliability in the calculation of the temperature profile of an assembly.

By integrating ProMetrics into the ViCON software, errors in data transmission to a higher-level system, such as MES, can be excluded and are available centrally in the MES for each assembly. Uniform logging in ViCON ensures the necessary transparency and traceability. Repeated maintenance of data is not necessary and the susceptibility to errors is significantly reduced.

A representation of the envelope curve visualises any deviations of the soldering profile from the specified parameters. Alarm messages in the ViCON show these deviations from the temperature profile outside the
envelope curve.

In order to be able to use ProMetrics from Rehm Thermal Systems effectively, both software and hardware components are required for optimal quality control of the soldering profile. The Solderstar software with the associated licence dongle is used to record the data. The Solderstar software is integrated into the ViCON and helps with thermal profiling. Using a measurement data logger from Solderstar, temperatures of a reference board are recorded in order to be able to check the process stability of the system. The system is equipped with monitors to record the temperatures; in addition, the temperatures in the heating zones are recorded by sensors.

ProMetrics can be used for single and dual lane systems and is the first system in the world that is also suitable for vacuums.

As a specialist in the field of thermal system solutions for the electronics and photovoltaics industries, Rehm is a technology and innovation leader in the modern and economical production of electronic modules. As a globally operating manufacturer of reflow soldering systems with convection, condensation or vacuum, drying and coating systems, functional test systems, equipment for the metallisation of solar cells as well as numerous customer-specific special systems, we are represented in all relevant growth markets and, as a partner with more than 30 years of industry experience, we implement innovative manufacturing solutions that set standards.