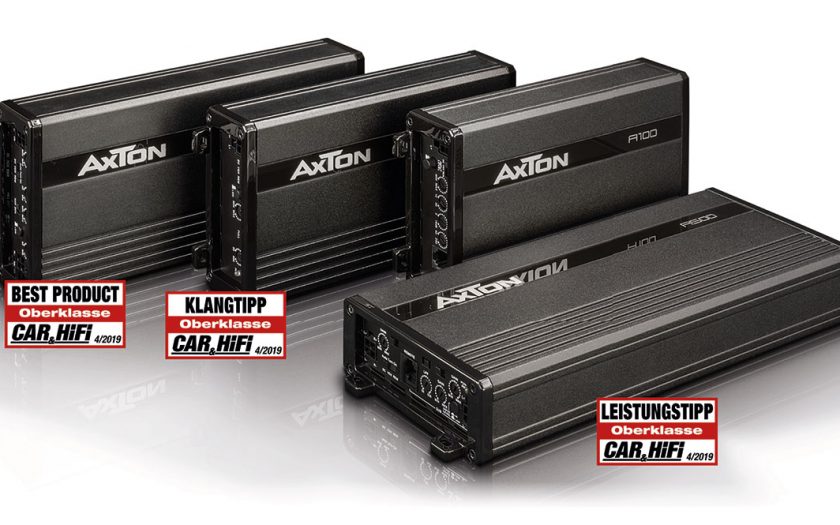 Compact digital amplifiers to give a bit of extra power to your factory radio or multimedia sat nav system are becoming more and more popular. Three mini power amps from the long established brand AXTON brand have now been tested in the 04/2019 issue of the German Car & HiFi magazine: the A200 two-channel model, the A400 4-channel and the A500 5-channel amp.
AXTON is well-known for powerful, easy to install amplifiers at a fair price-performance. Among these the A-Series is no exception: “Tiny, powerful, nice price”, is the verdict of the testers on the new power amps, which puts the advantages of the AXTON units in a nutshell. All three amplifiers were able to put up a convincing all-round performance in a major test, being awarded the accolades “Sound Tip” (A200), “Best Product” (A400) and “Performance Tip” (A500).

COMPACT AND WELL DESIGNED
No more than 10.5 cm wide and 4 cm high, in the opinion of the tech journalists these AXTON units are not only “of a really convenient size”, but also “built to a high standard”. A first class finish anodized aluminum casing, selected components, and careful PCB layouts, encapsulated power terminals – the A-Series is, according to Car & HiFi, “tidy and well made, generously equipped, everything makes a positive impression.”

EMC TIP: UNIMPAIRED RADIO RECEPTION
The new A-Series also impresses with its ease of installation. Thanks to the compact size and low thermal radiation, these flexible Class D amplifiers can therefore be fitted in almost any installation situation. “Installing these power amps out of sight is no problem. It is quick and straightforward.”
Equipped with high-level inputs with auto turn-on, the AXTON units function “very well with a factory radio, including the automatic turn-on” says Car & HiFi. Equally positive: in the electromagnetic compatibility (EMC) test, all three Class D amplifiers showed no effect whatsoever on the DAB+ and FM spectrum “so that unimpaired radio reception is guaranteed. Installation in the dashboard thereby allowing proximity to the radio is also no problem.”

CONVINCING IN THE TEST LAB
Based on their performance in the test lab the AXTON units impressed in all respects. “With overall low distortion levels the A400 scored well with a lot of power. 90 and 166 watts for such a small four-channel power amp is a lot”, is one assessment by the testers on the performance of the 4-channel model. “The A200 has a superb frequency response, the filters work cleanly in the range of a subwoofer/satellite crossover”, report the tech journalists. And “Unlike other low price five-channel units the A500 really pushes power to the 4 small channels. Low THD completes the outstanding impression.”

IMPRESSIVE SOUND
In the sound lab “these little amps act amazingly big”, according to Car & HiFi. “With really powerful attack they indulge the ears, ensuring both good quality and level.” In spite of this performance and power the musicality of the new A-Series has not been ignored either. “The music sounds crystal clear, but without being harsh. Tone colors sound correct and consistent. (…) The performance of the A-Series is also adequate for discerning music listeners.”
The testers were also astounded by the bass power of the new power amp line – especially in view of the compact size: “Considering the tiny housing, the pull in the low bass is more than impressive, especially as the deep bass response is not achieved by overly soft pulses.”

SUMMARY
The fact that the new AXTON units impressed the testers with a convincing all-round performance reinforces the final verdict: “Our test shows the A-amps shine with their really good quality and impressive performance”, is the praise to be heard from the tech journalists. “Very compact casings, great fitness for purpose, and not least very low prices are all on the plus side. Everything right, AXTON!”

The brand AXTON has been popular with car enthusiasts for almost 30 years. AXTON’s products are regularly recognized in trade magazines for their high price performance ratio. The range includes amplifiers and various loudspeakers for car retrofitting: component and coaxial systems, bass boxes, and also compact under seat woofers.