In the search for a manufacturer, the inventor from Wolfsburg has found the first series in production. The electric boards will be cost-effective on the market. 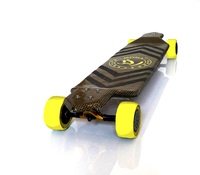 Wolfsburg, 15.05.2017 The search has finally come to an end for Sascha Mattiza. A manufacturer is enthusiastic about the technical details of the inventor Sascha Mattiza and will produce the Hornetboard Hyper. The electroskateboard provide an output of 8 KW and is by far the most powerful in the world. For the Hornetboard, top speeds of up to 54 km/h (34 mph) and gradients of 50% are also possible for heavy-weight drivers up to 120 kg (240 pound). Up to now there are no strong and fast boards in the worldwide market. “I have not discovered a strong and fast board in the market, which meets my high requirements,” explains the snow and surfboarder the basis of his Hornetboard.

Although it is so stable, the Hornetboard shows only two centimeters extremely flat and light. The whole technique is built into the board. Modern lithium technology, tamed by a battery management system, makes this high-performance board a true lightweight. Only seven kilograms (14 pound) brings this electromobility wonder to the scale and is therefore significantly lighter than normal electrocateboards, which are much heavier with up to 40 kilograms. Another plus: the driver can simply clamp the light board under his arm and go shopping.

“With this board, I have developed a true rocket without compromises. With this board you can enjoy electrocats on every meter, “explains Mattiza enthusiastically, adding,” it is not a mountain too steep and no speed too slow. The board runs really fast without overheating as fast as you like and it depends on it. No matter whether it is on the contrary, whether it is a headwind or a heavy rider. “

To buy, the Hornetboard will soon be available at Startnext.de, a crowdfunding platform of Kickstarter’s German offshoot. If you want to know when it’s time, just register as a fan at www.startnext.de/hornetboardhyper If the campaign has enough fans, the funding can start and after reaching the funding goal, the manufacturer immediately begins to produce. “The Board is at the customer’s disposal within three months. Thanks to the manufacturer’s cooperation, there is a variant at the introductory price of 799.00 Euro, “explains the founder of Hornetboards. The model comes with two engines and 3 KW power. The cooperation also has many advantages: the latest 3rd generation of the Hornetboard not only displays engine temperature and battery capacity in the remote control, but also allows you to select different driving modes, which double the driving pleasure at the push of a button!