Why money is less safe than you think 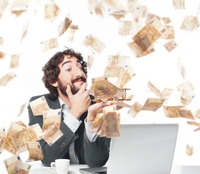 The Pantercon Crypto times table – Part 1: What is Money?

Money is the primary means of payment today, but its value is not the same as it used to be. In order to understand the background exactly, we start at the very beginning – with gold.

How does gold work as money?

In the Stone Age, money in kind, commodity money and utility money such as animals, rare stones, shells, fruits, spices and much more were used as means of payment. But they were often difficult to handle, because every single thing had a different value. Not even 2 cows necessarily had the same value – one gave more milk than another.

In order to simplify the barter transactions, the people used starting from approx. 1000 before Christ, primarily gold, so-called coin money as means of payment. Around 500 B.C. King Croesus had the first coins minted. It had certain advantages over all other goods and fulfilled the criteria to be officially recognized as currency or means of payment.

-Gold is rare and cannot be reproduced, changed or died. Therefore it is a good store of value.
-It is transportable – compared to animals it is a good means of transport, because it is small.
-Simple unit of account – 1 ounce of gold always has the same value as another ounce of gold, there were no differences

Gold had no intrinsic value such as animals or rice, which one could eat, or fabrics from which clothes could be sewn. Gold was „only“ gold and served „only“ as a means of payment. For example, a gold chain could be made from it, but it was still gold. Trust in gold was the only value and since everyone used and accepted it, the value and trust increased. Trust is the most important factor for a means of payment.

Gold was a decentralized means of payment. That is, there was not one place that spent gold, but anyone could get it out of the ground and use it. Everyone and yet nobody had control over it.

But gold also has its disadvantages:

-It is rare, but counterfeiters added copper to increase the quantity.
-It is small, but heavy and therefore the transport is not always comfortable.
-It is difficult to share, e.g. in shops. You couldn’t just cut off a piece of the ounce

From gold to money

Thus paper money was born and had some advantages:

-Since it was tied to gold, it was just as rare as gold, so it had the same value. Due to the elaborate design of the promissory notes, they could not be forged. It was therefore a good store of value.
-The paper money is small and light and therefore easy to transport, so it is also a good transport medium.
-It is easy to divide, as there are different size units, so a good unit of account is a good one.

By making it used by all people, everyone had confidence in it. If you had brought it to the bank, you would have easily recovered the gold you had put in before.

Paper money was the perfect means of payment until the central banks made a big mistake in the 1944s. They considered the gold standard, which had already been suspended during the First World War, unimportant, because nobody intended to exchange the paper money back into gold and slowly abolished it.

From 1944 to 1971, only the dollar was tied to gold. Gold cover in the dollar was replaced by unofficial oil cover after a massive crisis in the 1970s. Thus, King Dollar could keep the trust of the people but the gold standard and thus the real value was no longer available.

Digital with electronic money it is even easier to increase money. It can be multiplied quite simply, that is how it is usually done – it is created out of nothing.

By this money multiplication the value of the money sinks approx. 4-5% per year – this is called inflation. If one calculates the value of a 100EUR bill at the beginning of the Euro issue and now 16 years later, then it is clear that a 100EUR bill is far from worth 100EUR anymore, but not even half. In principle a banknote is not worth more than a piece of paper. Thus, it has lost the criterion for a good store of value.

The fact that it is centrally controlled by one body, namely the central bank, has disadvantages:

-It has full command.
-The bank can determine when money can be withdrawn
-She can also determine how much money you can withdraw.
-It determines who can have an account
-The bank can simply freeze an account, you don’t get a cent more! E.g. Greece or Cyprus and also with us such a scenario would be theoretically possible overnight.

Just like gold, money has no inherent value, the value is based purely on trust. But since everyone around the world accepts today’s money, trust is assured.

If every person would go to the bank at the same time and claim the saved money, there would be a massive problem. It is not available! It exists mostly only digitally and also in gold it could not be paid out, because the value is not covered for a long time any more. Nowadays money has absolutely nothing more to do with gold and is therefore called Fiat money.

It is to be hoped that this scenario does not arrive, because if it did, the financial world would collapse on the spot and chaos would break out.

If the cash were to be abolished, as the plan has already been expressed several times, the central banks would have control over everything and everyone. For some reason, the central bank could restrict the use of each individual, you would be completely destitute, from one moment to the next.

The question then arises: is trust in today’s money or in central banks really justified?

In 2008, a new form of currency was developed, the crypto currency. No matter if you use Bitcoin, Ether or any other digital crypto currency, they all run through a blockchain and are decentralized.

If, for example, Bitcoin were the new currency that everyone uses, then it would no longer be traded and it would become stable. Also the confidence in it grows. It is the simple explanation of supply and demand: if a lot is sold, the supply increases – the value decreases. If a lot is bought, the supply falls – the value rises.

The advantages of crypto currencies are obvious:

-They are completely open to anyone, anyone can use them, there is no place that would or could forbid it.
-24/7 access (24 hours a day, 7 days a week)
-Visible for everyone
-Not hackable, since no central party has access or can change anything at will
-It is not manipulable and cannot fall victim to thieves. because it is stored decentrally on many PCs at the same time.
-Not reproducible with a fixed coin offer – no inflation

Many banks and financial experts still like to talk badly about crypto currencies at the moment. But if you look at fiat money – today’s money and crypto currencies exactly, then the regular currencies have their certain and specific shortcomings that the money economy is aware of.

The only drawback of crypto currencies is their volatility (the extent to which prices, stocks, currencies, interest rates or even entire markets fluctuate within a short period of time), which is itself offset by the annual 4-5% depreciation of regular currencies.